The atmosphere was electric at this year’s Collision tech conference held in Toronto, Ontario—the first in-person Collision since the pandemic began two years ago.

Collision boasts itself as “the Olympics of tech,” “Coachella for geeks” and “TIFF for tech,” and to a first-time attendee, the event lives up to the hype. From the moment you set foot in the venue, you’re mesmerized by the bright, bold, larger-than-life stages that project condensed 20-minute impactful presentations on 20-foot jumbotrons. Industry celebrities speaking with the gravitas of a TED Talk are reaching the hearts and minds of thousands of innovators, industry enthusiasts and thought leaders.

This year, 35,000 attendees filled the Enercare and Beanfield Centres on Toronto’s iconic Exhibition Place grounds. It was the second in-person Collision event in the city.

The transition to Toronto

What began as a spinoff of Europe’s Web Summit, Collision was launched by Irish entrepreneur Paddy Cosgrave in 2014 in the city of New Orleans, Louisiana in the United States, with a humble 1,500 attendees.

Cosgrave made the monumental decision to bring the conference to Toronto, Ontario in 2019. “A new wave of Canadian founders are building companies not just out of Canada but all over the world,” he told The Globe and Mail in 2018. “From Shopify to Cloudflare, there’s a new generation blazing a global trail. Google’s AI visionary, Geoff Hinton, is based in Toronto, not Silicon Valley.”

Indeed, Shopify, Cloudflare, Google and a whole host of tech giants have set up shop in the province. Even during the pandemic, while the world shut down, Toronto’s tech scene saw expansions from Pinterest, TikTok, Reddit, Wayfair, Netflix and Doordash.

Cosgrave is no stranger to the fact that Toronto is North America’s fastest-growing tech market. He stated to The Globe that in order for the conference to grow, it would need a “bigger and more globally connected home,” and Toronto was it.

With a presence in autotech, fintech, medtech, cleantech, cybersecurity and digital media, Ontario, Canada, situated in the heart of North America, was the ideal new permanent location for Collision.

Representing every corner of the tech industry

While 2020 and 2021 put a stop to in-person conferences and events, the 2022 Collision Conference was met with enthusiastic crowds and dynamic networkers from around the world, with Ontario-based booths showcasing strengths in every corner of the showroom floor. 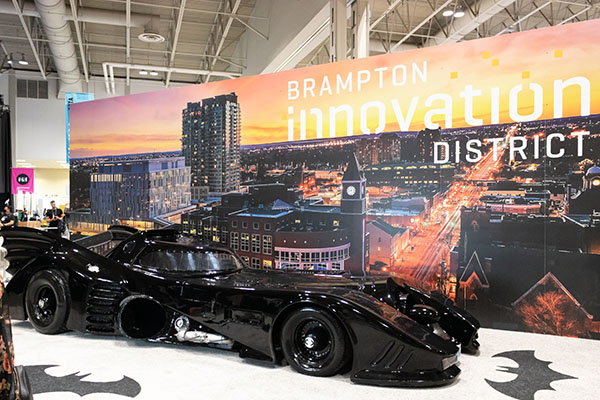 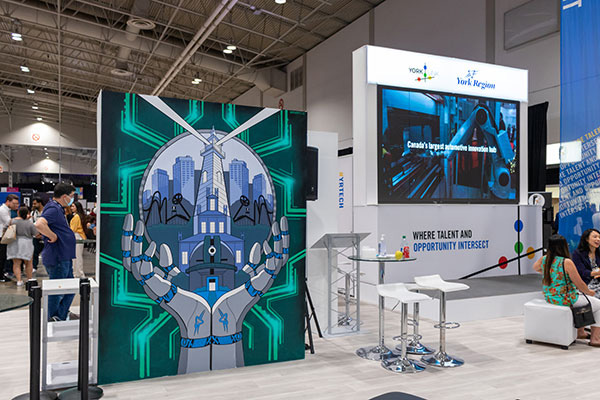 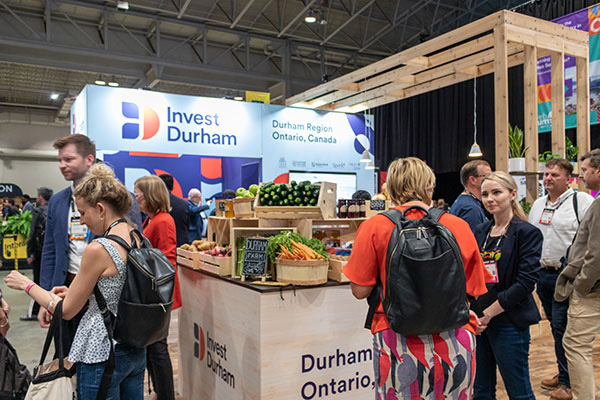 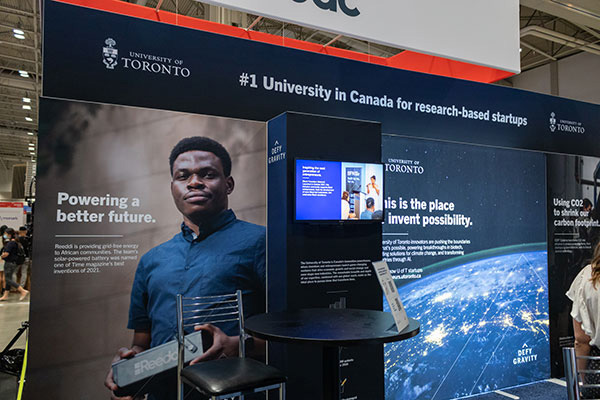 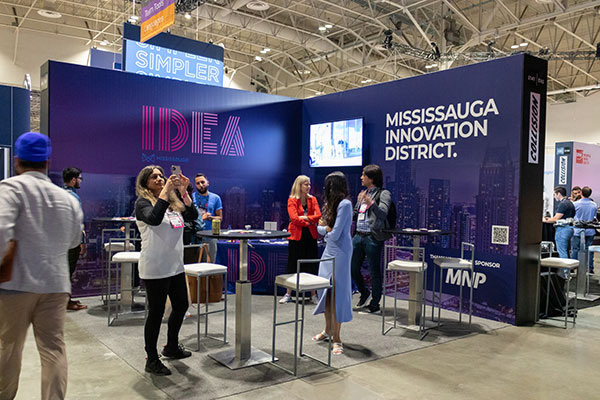 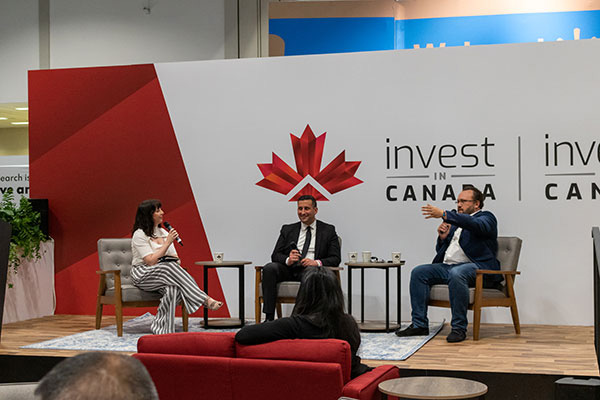 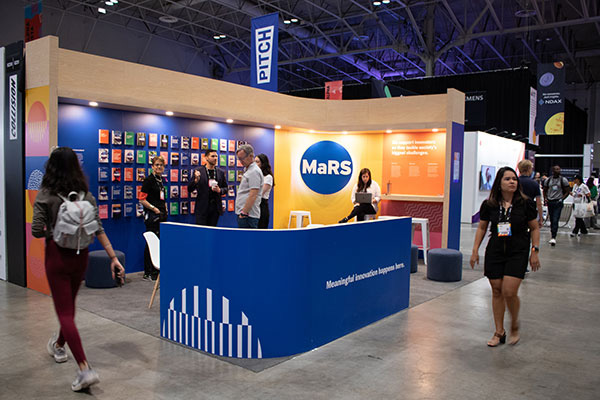 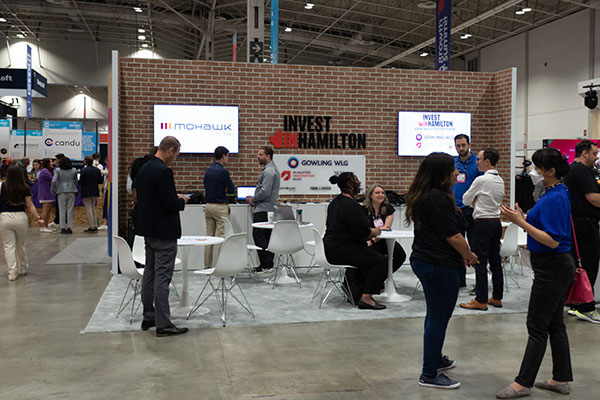 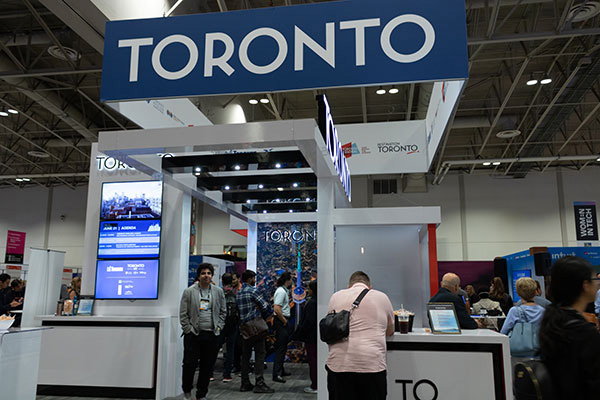 The Greater Toronto Area had the greatest regional presence at Collision, with booths from Durham Region (known for autotech, and home to the ACE Wind Tunnel), York Region, Mississauga, Hamilton and Brampton.

All of these cities and more are along Ontario’s “innovation highway,” the province’s expansive IT corridor running from Windsor and Waterloo in the West to Toronto in the centre and Ottawa (a renowned hub for 5G) in the East.

At Brampton’s Innovation District—an impressive hub with Ryerson Venture Zone, Rogers Cybersecure Catalyst, displays for Stellantis, Coca Cola and MDA and bookmarked by local innovator and celebrity Brampton Batman—Sheridan College showcased their Centre for Advanced Manufacturing and Design Technologies. A team of engineering students from the program demonstrated the capabilities of an intelligent robotic arm designed to read the roll of a die to select the fated conference giveaway from its tray and place it in front of the receiving attendee.

The talent pipeline for STEM in Ontario is massive, with 63,500 STEM students graduating every year and growing, feeding into a force of over 320,000 IT workers and 24,000 tech businesses. Education is an instinctive part of Ontario’s culture, with 71% of its working-age adults having completed post-secondary education, a rate higher than any other OECD country.

An entire section of Collision was dedicated to Ontario booths and featured innovative new startups ranging from fintech to medtech to crypto—rotating with new companies each day of the conference. While Ontario had 148 delegates in attendance at the event, a select few represented their small businesses in a big way on the show floor, networking with like-minded businesses and potential tech partners from around the world.

Tech for the future

As we slowly emerge from the COVID-19 pandemic, we’re all searching for the new normal when it comes to business, one that is both more remote and digitally connected. We’re also facing the future of our environment and what it means for our businesses, our cities and our way of life. Witnessing talks and booths from across Collision over three days, the message was clear—the greatest minds from every corner of the tech world are innovating right now to meet our demands for connection, community and bettering the planet. Tech for good. Tech for the future. 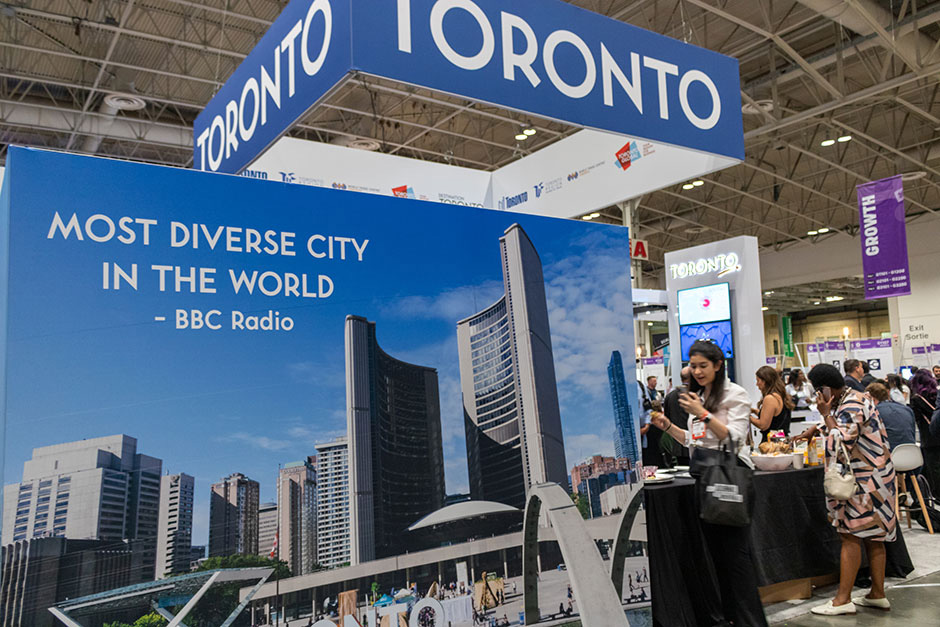 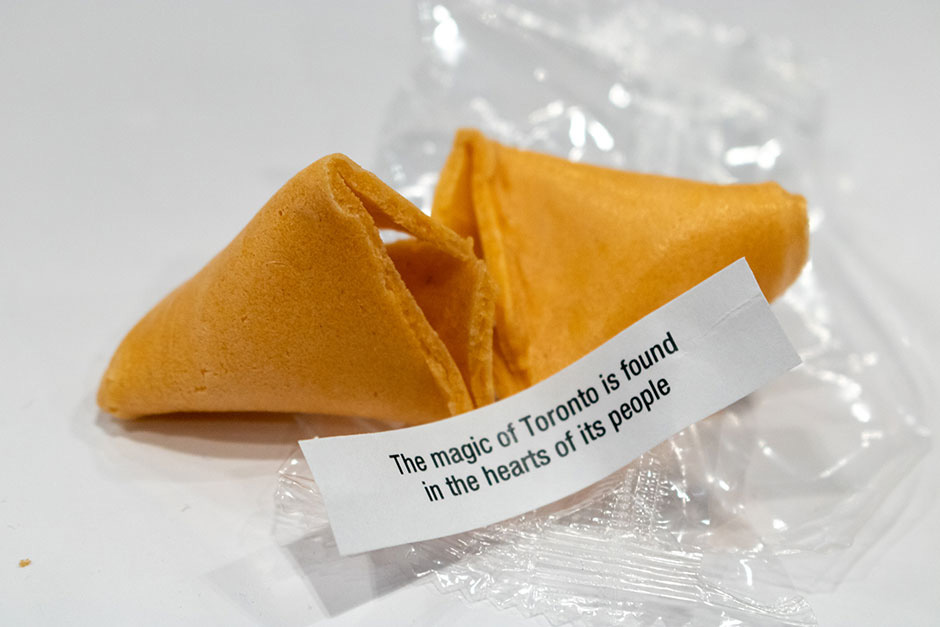 Toronto is a place where IT companies succeed and where diversity is its strength.

For a newcomer to Collision, the event holds true to its name—a place where tech innovators, thought leaders, academics and regional representatives collide, providing an atmosphere ripe to make things happen.