Ontario’s an ideal place to start a business, particularly in the green energy space. The R&D tax incentives, growing investor community, and ecosystem of other green economy organizations were a huge benefit for us when we were getting off the ground.

Clean, green, sustainable energy will become a significant component of power grids across the globe over the coming decades. With international attention focused on the critical battle to limit the severity of global warming, reliance on renewable power sources is sure to accelerate rapidly.

However, such a substantial transformation in energy production shines a light on one of the major challenges of renewable energy—storage.

Where traditional, carbon-based energy sources can be turned on and off depending on demand; renewable sources like solar, wind and tidal are based on natural processes, meaning it’s critical to collect as much of that energy when it's available and then store it for when it’s needed.

The challenge is storing energy requires a smart solution—and a lot of space. 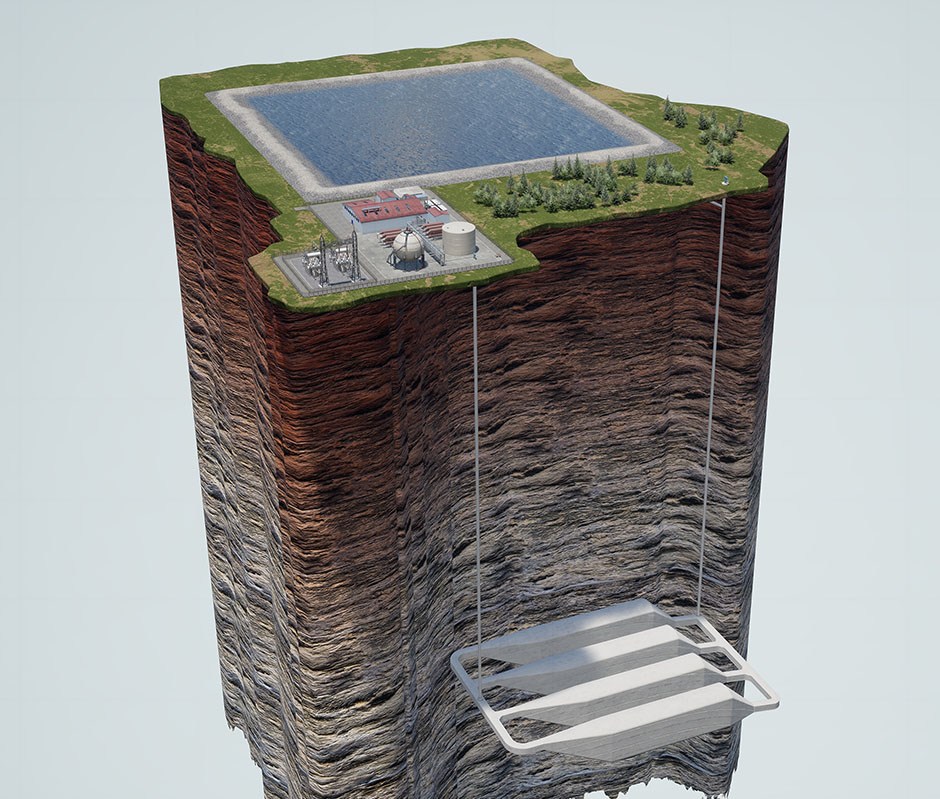 “Over the past few years, renewable energy generation has dropped in price, making it a more accessible option,” says Lucas Thexton, Hydrostor’s Senior Engineering Associate. “But renewables are non-schedulable power sources, so if we want to have a grid dominated by renewable energy, long-term storage solutions like ours are vital.”

Hydrostor’s core team is built up of around 30 people based out of Toronto, with scalable project-based teams based wherever they’re building. Having started in the province, Hydrostor’s CEO, Curtis VanWalleghem, explained to us why being in Ontario was so important to them:

“Ontario’s an ideal place to start a business, particularly in the green energy space. The R&D tax incentives, growing investor community and ecosystem of other green economy organizations were a huge benefit for us when we were getting off the ground. In fact, the 2009 Green Energy Economy Act is what first gave me the opportunity to start working in this space.”

And after that start, there was no looking back for Curtis and his team. The next few years are already looking busy for Hydrostor with three big projects ramping up on opposite sides of the planet: two in California (U.S.) and one in Australia.

In one of the projects in California, Hydrostor will be building a storage facility in a state that’s often considered a leader in the green transformation. “Being in California is exciting for us,” Curtis said. “It’s a great example of how green mandates can work, and our team will play an important role in that.” Hydrostor’s Chief Technology Officer, Davin Young, added: “This project would be just off Highway 1. It’ll be a beacon for the clean energy transition in the heartland of California for all to see.”

The other California-based project at the Pecho Energy Storage Center is strategically located to provide enhanced utilization of both existing and future renewable energy resources serving California and the Central Coast. Pecho’s emissions-free operations will play a vital role in helping meet California’s future power supply needs and significantly reducing the frequency of large-scale blackouts.

In Australia, Hydrostor is converting an old zinc mine into a facility that will store and distribute power to the entire city of Broken Hill, a town famous for being the country’s oldest zinc mining town. “The Broken Hill project is precedent-setting for us, as our first facility where we’re in charge of not only storing power but also distributing it to the residents. When it’s up and running, we’ll be shifting an area built on zinc mining to 100% renewable energy. With this project, we’re expanding our footprint, and it’s another step on our long-term goal of having facilities on every continent—except Antarctica, of course,” Curtis said.

Just one of many necessary solutions

Hydrostor’s offering has the potential to unlock renewable energy all over the world by ensuring that safe and effective storage is available. Yet with the scale of the challenge that global warming presents, it is clear that Ontario’s green economy ecosystem will be increasingly important over the next decade.

“The climate crisis is an existential issue, so we’re going to need a whole lot of new innovative technologies to help us enjoy both the richness that comes with energy consumption, along with that which comes from a healthy climate system. Hydrostor’s A-CAES is one piece of that puzzle. As a global society, we’re going to need to build a lot of carbon-free energy capacity to really start cutting down our emissions,” Davin told us.

With companies like Hydrostor coming out of Ontario and showcasing the quality of the province’s talent, it’s likely that their products—and the offerings of other Ontario-based organizations—will be vital. That is if, as Curtis put it, humankind is “going to do the biggest thing it has ever done and make staggeringly big changes to how we operate.” It’s a global project in which Ontario and Hydrostor are well designed to play their parts.

Learn more about how Ontario’s cleantech sector is growing and innovating at a rapid pace.

Autonomous Driving in Adverse Conditions – WinTOR for short -- which aims to teach self-driving cars how to handle whatever winter throws their way.
Read more - University of Toronto AV researchers take on winter

One of the world’s largest parts makers, Martinrea says being headquartered in Ontario enables it to innovate and respond nimbly in an industry moving rapidly to EV production.…
Read more - Rob Wildeboer on Martinrea – and the integrated North American auto industry

Since launching in Ontario, Swoop Canada has struck a chord, building up its Canadian client base to over 500 companies, and is looking at tripling its team within 12 months. “…
Read more - Irish fintech startup Swoop has landed in Ontario's flourishing entrepreneurial ecosystem

Knowledge is power, but many companies have historically known very little about their customers—at least until data analytics companies like EQ Works came along.
Read more - EQ Works is revolutionizing how companies understand their customers from its “home base” in Toronto